A Zimbabwean woman told a story at a performance for refugees and asylum-seekers.
Some time later we saw this woman and asked her how it was to tell her story and see it played back in front of other people. She said that it had helped her to feel like she belonged, that she felt less afraid in her life. She said that she was able to go out and do more things now and it helps her to know that others across the world have stories like her own.

This is the impact that Playback Theatre can have. Playback Theatre is an international improvised interactive theatre form where experiences and stories are told by the audience and given life by the actors and musician.

Plymouth is a dispersal centre for asylum seekers and refugees, so there has been a large influx of displaced people arriving over the last 5 years in what was a predominantly white mono-culture. Half of the asylum seekers in Plymouth are from Iraq and Iran. There are 400 people seeking asylum at any one time in the city – with about 5 positive decisions a month. Asylum seekers are regularly moved from city to city with just a 24-hour warning.

We have a strong partnership with the charity START (Students and Refugees Together). START brings social work students on placement together with asylum seekers and refugees in order to help with housing, benefits, education and the process of gaining refugee status. START sees that Playback Theatre supports their aims and adds a dimension that their work cannot provide. They say that Playback Theatre brings people together across language and cultural barriers, builds a sense of community, allows people to participate by watching and gives a chance for people to practice speaking English together.

START has already helped promote our work in Plymouth. They have gathered audiences and provided premises, and evaluated the impact of our work with us. Initially we worked with mixed groups and then we were asked by START and some of the Arabic women to provide some performances for women only audiences, as it’s often difficult for women to speak out in mixed groups. We ran a three-month pilot project. Largely our audience were women from Arabic speaking countries and Africa.

Tarte Noire delivered performances to women refugee and asylum seeker last year. These sessions built a strong foundation of trust between the women in the audience and the women actors. We continue building these relationships.

During Playback Theatre performances these women had conversations about bringing up their children in Britain – their fears about different boundaries/values in British culture and how much they want their children to integrate into British culture, and the conflict between these hopes and fears.

An Iraqi woman said
“We don’t like the war, we want people to know that we are gentle and kind. TV shows Muslim people as excitable and making trouble, but very few are like that. It’s the government’s war. We want peace. I worry about my husband and my children being kidnapped and killed by people in Iraq – people outside who have come to make trouble. We want it to be safe in Iraq.”

These women are coming to terms with a community that isn’t aware of or open to their life experiences. They are overcoming past trauma, experiencing racism, missing home and culture and family, leaving their children behind, they are uncertain about their future, their housing, their status, building lives from fragmentation and isolation. We respond to this need.

‘Sisters at the Edge’ is a long term project, with the aim to take Playback Theatre to women whose voices are not usually heard. Our objective is to stand beside these women and offer a creative and empathic response to their life experiences in order to help restore their strength and emotional well-being, after, often, very traumatic life events. Read the Report for Devon Community Fund Read feedback of the project

"I didn’t know what to expect when you told me there was theatre company would be coming along. I found this experience AMAZING!! Thank you so much for your hard work."

"What a sympathetic and quite brilliant therapeutic session... moving, caring and kind... Clever insight, but empathetic presentation for all. well done and thank you.”

This is a project for young women, women who have suffered domestic violence and women who are refugees or seeking asylum. 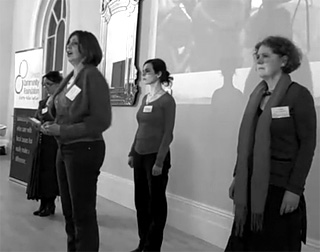