Participants from Lithuania, Ireland and UK first met at ‘Encounters at the Crossroads’ training where we exchanged ideas and began working together on this project. It was inspiring to meet new people from different countries to work with.

[tabs style=”1″] [tab title=”Ireland”] In Dublin, several months later we met each other again. We discovered that we were well prepared by the work we had participated in together during ‘Encounters at the Crossroads’. We warmed up on a rainy night in Dublin, and prepared ourselves for the two performances.

In Monahan, there were 70-80 people, of all ages, and about 90% were Lithuanian. We heard stories about migration, and integration into Irish communities, and what they miss about home. From these stories of home, our impression of Lithuanian culture was that everyone works very hard and has no time, and people’s reflections about Lithuanian people is that they don’t want to be open about their feelings, and that in general people are dissatisfied and unhappy. However, during the performance that night and the next night in Dublin, we found the audience full of stories, very open and joyful and humourous. We observed a very strong sense of community being created and it was the first time that Lithuanian people in this area have come together to meet each other. There were many requests to that this work could continue. Someone said it’s, “the most exciting thing that’s happened at the Arts Centre”.

In Dublin, half the audience were Lithuanian and half Irish. Members of Dublin Playback Theatre Company came to see the performance and were the first to speak, which was interesting to notice as they are from the dominant culture both as Irish people and as people familiar with Playback Theatre. However, very soon the Lithuanians began telling their stories. We were left with same impression of Lithuanian culture and people – yet very tender, honest stories that were self-revealing were told. While the mood was more sombre than in Monaghan, again a sense of community was created which they appreciated being a part of. A sense of belonging and acceptance was gained where previously they were not connected to each other.

The Irish women who were members of this project worked very hard to make our journeys and performances go smoothly. As participants of this project, we feel so satisfied that our international performances have personally touched audience members – they have been personally involved. [/tab] [tab title=”London”] The ash cloud came on the morning we were to meet in London. Luckily the Lithuanian women had arrived the day before, but the Irish women were unable to get to London and we missed them very much. Again they were so committed to being part of the project that they spent days driving to the airport and back – they tried so hard to get to London but couldn’t. Instead they sent us many messages of support over the two days.

The first performance in a tiny upstairs room that is a Lithuanian Club in East Ham. About 30 people squeezed into the tiny space. It was obvious that many activities for Lithuanian people happen there and a sense of community already was very strong. However, Playback Theatre was very warmly welcomed and everyone enjoyed it so much. There were lots of tears and laughter during this performance – a wide range of emotions expressed. Our impression was of a very warm, emotionally literate community who are also very humble. There was more of a sense of people being connected to each other there.

The next day our performance was in a Lithuanian restaurant, and some people from the night before came to see Playback Theatre again. The owner of the restaurant also watched the performance and some UK Playback Theatre people came to support the project too. They wanted to meet international Playback Theatre people and valued the project very much. Before and after the performance the Lithuanian community were helping Rasa and Egle to find out how they could get home, as the ash cloud had stopped all flights. UK Playback Theatre people were supporting them too and we parted with a readiness to help if needed, finding somewhere for them to be for the evening before the bus came to take them home. We were struck with a strong sense of the distance between UK and Lithuania – travelling through France, Germany and Poland to get home – we were surprised they could do it in three days. [/tab] [tab title=”Vilnius”] For the last phase of this international project, we went to Lithuania to run training for the Lithuanian Playback Theatre Company and a Hungarian Playback Theatre Company. This was our first opportunity to train Playback theatre Companies internationally. This was a meeting of three different cultures where all communication was translated into two languages – and even though we all shared the same theatre form we had a very intense two days, working hard together – asking questions about this theatre form and it’s applications and discovering what human beings need to do in order to understand each other.

The next day we went to the University of Belarus in Vilnius, to give a performance to staff and students and visitors. At the beginning of the performance we had to decide what language would be conducted in – Russian, Belarus, Lithuanian and English were all possible! As English speakers, this possibility that most people are tri-lingual is astounding.

Stories from students and stories from staff were told. The performance ended with a story of a dream – a dream about being creative and being free to be spontaneous and creative.
This was rich meeting of countries and cultures. Everyone was very happy to experience this new form of theatre.

Our experience of meeting Lithuanian people has been very moving and enriching. We found an emotional maturity in the Lithuanian Playback Theatre Company as well as a generosity, humility and depth of feeling and being prepared to take creative risks. We would like very much to build on this cross-cultural encounter. We discovered that Lithuanian people generally value a good and wholesome life. We aspire to develop an enquiry, using Playback Theatre methods to look at women’s place in their communities. [/tab][/tabs] 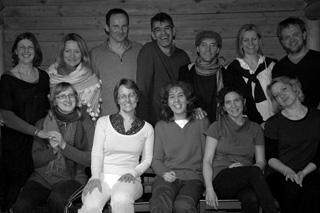 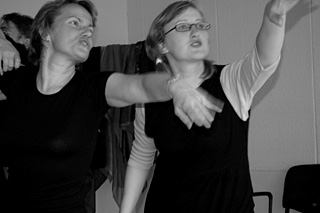